THE EUGENE A. GILMAN MEMORIAL CHAPEL is located near the entrance on the main drive into the Cemetery. The funds for the chapel were provided by the will of the late Harriet D. Gilman as a memorial to her husband, who passed away on June 17th, 1916. Mrs. Gilman’s will specified that the Chapel was to be built at such a time as the Trustees of the Cemetery saw fit, and it was accordingly built in 1931.

See More About the Restoration Project

The Chapel is a fitting memorial to Dr. Eugene A. Gilman, M.D. (1841 – 1916), a physician whose care was of great comfort to the local population around the turn of the 20th century. Dr. Gilman was born in Mt. Vernon, Kennebec County, Maine. Upon their passing, J.S. Waterman & Sons were the undertakers for both Eugene and Harriet. The ashes of Dr. Gilman were placed to the left and above, behind the altar of the chapel, and the ashes of his wife Harriet were placed to the right of the altar at the same level.

The Gilman Chapel was designed by the firm of George F. Shepard (of Milton, MA) and Frederic Baldwin Stearns (of Auburndale, Newton, MA) whose office at that time was located at 65 Franklin Street in Boston. The chapel is constructed of brown seam-face granite in the Gothic style and its surroundings are beautifully landscaped with evergreens and flowering shrubs. The interior of the Chapel is finished in weathered oak, with windows of cathedral glass. The light from these windows creates an atmosphere of restfulness, peace, and quiet. In accordance with Mrs. Gilman’s will, the two niches on each side of the pulpit hold the ashes of both Dr. and Mrs. Gilman.

Above the entrance to the Chapel is a memorial window depicting the Resurrection. This window was given to the Chapel through the terms of the will of Lottie R. Curtis in memory of her father, William D.C. Curtis, a Trustee of the Cemetery for many years. At the top of the window is the Dove of the Holy Ghost with two seraphim, Alpha and Omega, symbolizing that our Lord is the beginning and end of all things. The center panel of the window depicts the figure of Christ rising triumphant from the tomb, holding the banner of victory. At His head and at his feet are depicted the seven gifts of the Holy Spirit. Each side panel of the window depicts an angel holding a trumpet of praise. The borders of pomegranates symbolize immortality. The blue backgrounds with stars and clouds represent Heaven.

The Friends and the Chapel
From its earliest inception, the Chapel was used by the priests of neighboring St. Brendan’s Church to hold Mass. On December 28th, 1980, the first annual Christmas Mass was offered there on a newly-crafted altar created and donated by Edward Van Der Meulen in memory of his niece, Kathy Sutliff. The large congregation of several hundred people were called to the service by the sound of electronic chimes, loaned by Schulmerich Carillons of Pennsylvania. A permanent set of chimes was subsequently funded by the Friends of Cedar Grove Cemetery.

Gilman Chapel is also made available for use for services or weddings. The main auditorium has a seating capacity of approximately 160. At the front is a private room which may be used by any bereaved family who does not wish to be in the main auditorium while services are being conducted there. There is a nominal charge for the use of the Chapel whether burial is made at Cedar Grove Cemetery or elsewhere.

For further information, please call the Cemetery office at 617-825-1360 or submit your query via our contact form. 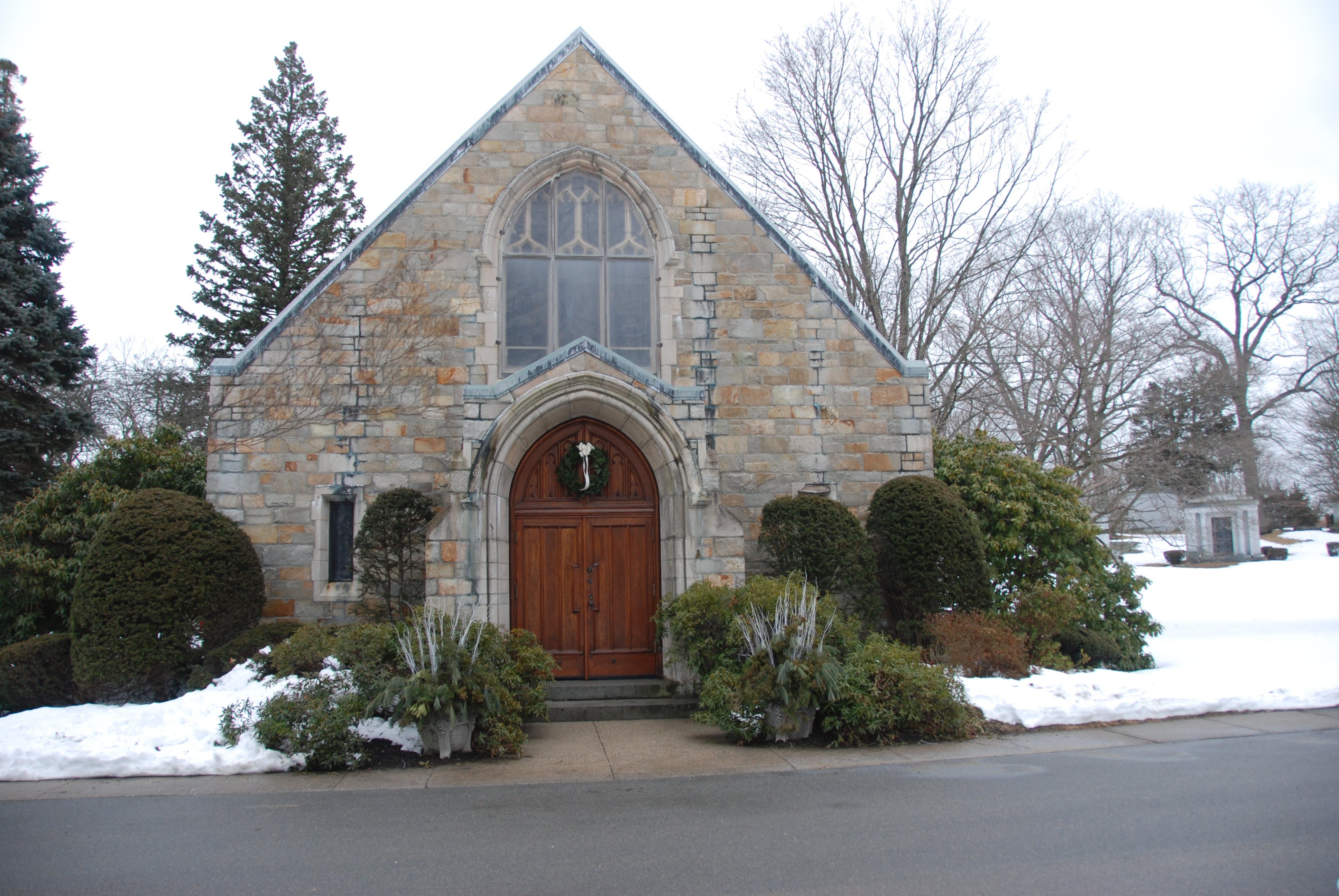 Eugene A. Gilman Memorial Chapel. Designed by the firm of Shepard and Stearns of Boston, and built 1931. Click on the image for an enlarged view. 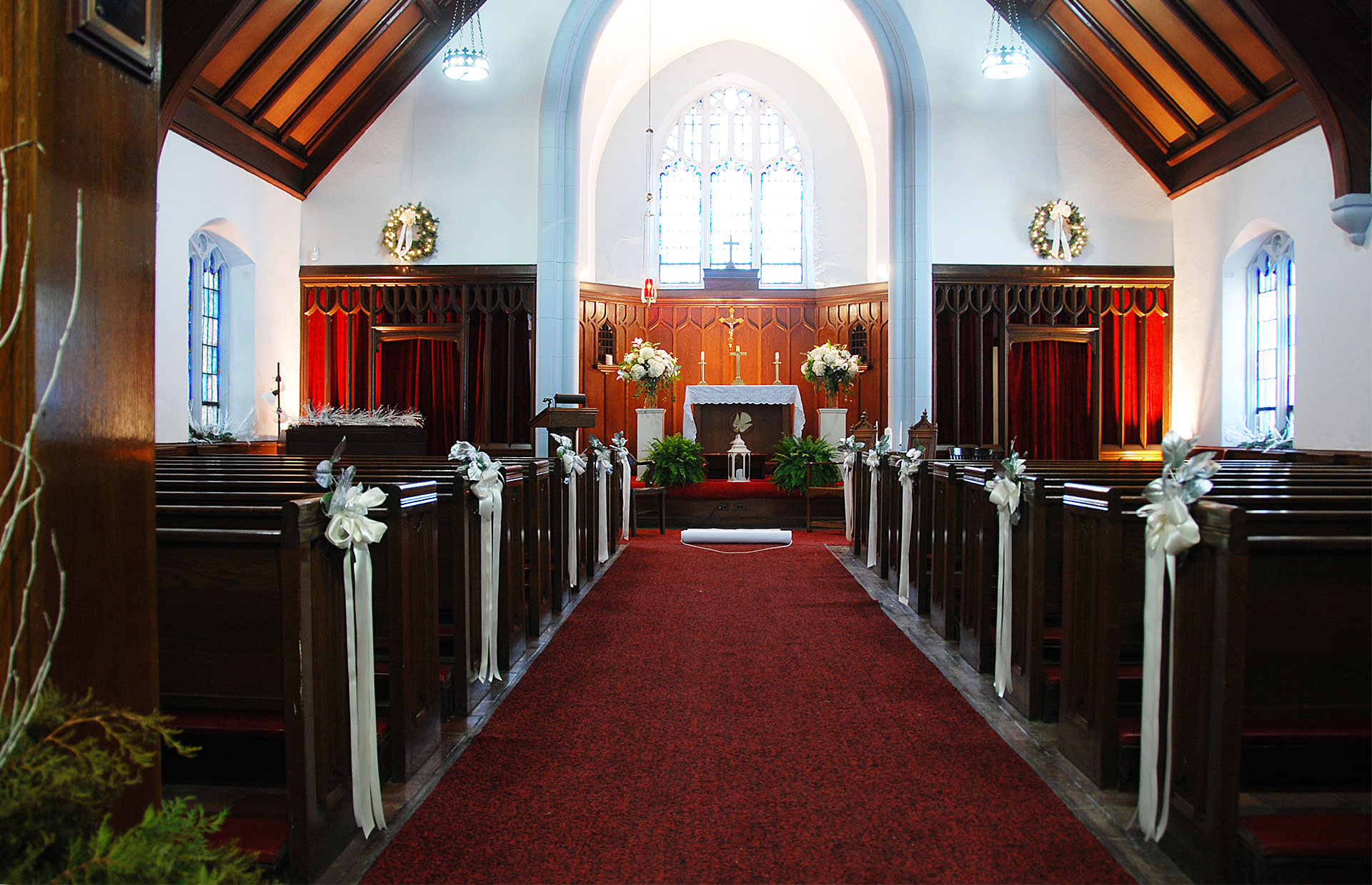 Gilman Chapel, Interior View. Click on the image for an enlarged view. 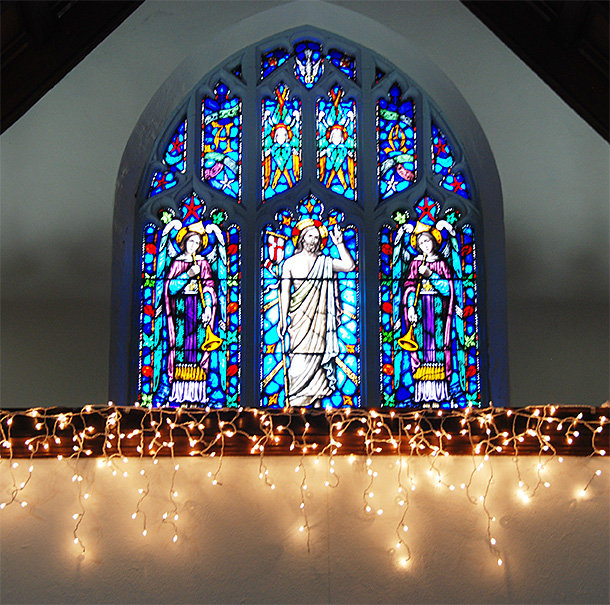 William D.C. Curtis Memorial Window, Given by Lottie R. Curtis in Memory of Her Father. Click on the image for an enlarged view.