In the mid-nineteenth century the rural cemetery movement began in the United States and Europe. Stemming from overcrowding and health concerns associated with urban cemeteries, the rural cemetery movement pushed for cemeteries to be moved 1 – 5 miles away from city centers, where they would be far enough to be separate from the city but close enough to be easily visited. Cedar Grove Cemetery was among the cemeteries in the Boston metropolitan area opened during that time, shaping much of its architecture and design.

Cemeteries created during the rural cemetery movement focused on creating pleasant and memorable burial grounds, with a focus placed on landscape, architecture, and geographical aesthetics. At Cedar Grove Cemetery, you can see these items come to life with our oak-lined avenues, waterfall, peaceful paths, and hilly terrain.

We recently focused some of our landscaping energy on the rotary near Sycamore Ave. Here, four paths join and create a small circle of land in which we planted a perennial garden through a sponsorship by the Taverna/Donovan families. Lisa Ahern, a friend of the cemetery, designed a beautiful perennial garden with a mimosa tree at its center. This tree was originally tall, although skinny and a bit spindly, when we “rescued” it from the “home for lost trees” (aka the local nursery) and it has since taken root! This lovely mimosa tree has airy leaves, and a canopy that will continue to spread out over the garden. While mimosa trees typically bloom in July, ours has sent out two flower blossoms this week – two months late! This is definitely a signal that it is happy in its new location. Welcome home, mimosa! 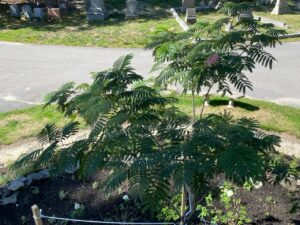